- May 06, 2013
Forming, storming, norming, performing, mourning -- the stages lof team formation.  I’ve experienced this natural progression a few times, transitioning from a group of strangers to a well-oiled machine – to friends.

One team I worked on figured out a way to collect data and measure our journey from new to awesome.  We didn’t know about this standard team lifecycle when we started, but that didn’t mean we could avoid it.  In fact, as you’ll see in this essay, embracing the steps of team formation helped us move through the phases and become a highly efficient team that much faster.


We were a team of five working in an industrial-like university setting.  Our mission was to build a new web-based workflow tool in support of the security requirements elicitation methodology, SQUARE.  We had a budget of about 3,800 engineering hours and a delivery date in 16 months.

Overall my team had worked together well from day one, but coming together as a team was not easy.  Our biggest challenge involved overcoming the inherent cultural biases and assumptions that everyone brings with them wherever they go.  This was initially amplified for us being from so many different places.  For the first month we fumbled because each of us simply assumed that everyone else worked the same ways, that we had the same values.  Of course we did not and this realization created riffs of distrust within the team.

To consider us a team at all in the beginning was really absurd.  We were from all over the world and everyone was new to Pittsburgh.  At the time this was one of the most diverse groups of people with which I had ever worked with teammates hailing from the US, Panama, India, Bangladesh, and Taiwan.  In my case (and I’m sure it was the same with everyone) I came from a team that worked like a well-oiled machine.  The team I worked with before had been together for over a year and had been working efficiently for over half that time.

Leaving an amazing team and going to a new one with no trust was jarring and excruciatingly painful.  After the first month this new team could barely work together on anything.  We were all still in mourning after having left our previous, awesome teams.  And things were not going well as we were getting to know each other while at the same time trying to get work done.

Conflicts, distrust, missing commitments – we were a full on storming team.  And we seemed to be stuck there.

In hindsight, the biggest problem we faced in the beginning was that we didn’t know we were a dysfunctional team.


One tool that helped turn everything around for us was the Team Dysfunctions Survey.  The survey comes from Overcoming the Five Dysfunctions of a Team by Patrick Lencioni.  The book is a field guide for, as the title suggests, overcoming the various dysfunctions teams face.  The book consists of equal parts theory and application.  Each chapter talks a little about a dysfunction and then presents activities that can be used to help overcome the problem.  The material will look familiar to anyone who has ever attended a leadership retreat but it’s presented in a disciplined, well organized way so that any team leader can use it to help bring the team together.

The Team Dysfunctions Survey is a brief 15 question quiz that all team members take to gain a quick assessment of how everyone thinks the team is doing.  When my team took it we kept the lowest score in the group from each of the five sections of the quiz.  Our thought was that if one person on the team feels there is a problem in an area, then the whole team has a problem.  So if one person felt a lack of trust, for example, then trust is an area in which the entire team would need to work on further.

The quiz quickly revealed some important aspects about our team.  One of the most important things I learned was that I, as the team leader at the time, had a skewed sense of how the team was actually coming together.  With data from the survey in hand and a way of thinking about building healthy teams I had the power I needed to pinpoint the exact areas we needed to work so we could come together as a team.

Lencioni describes the five dysfunctions as a pyramid where the things at the base must be present for the things at the pinnacle to be successful.  For example, trust, at the base of the pyramid, is the most essential part of any team.  Not surprisingly, this was also the area where my team was having the most trouble as revealed by the Team Dysfunctions Survey.  As such, building trust within the team became our top priority. 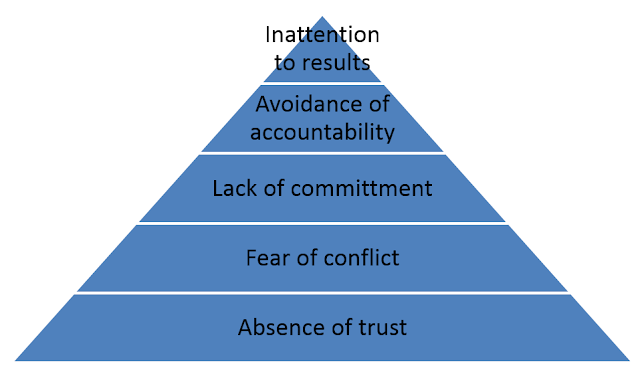 Building a Foundation Based on Trust – Getting Past Storming


Really the only way that you can trust someone is if you know them on a human level.  The only way to know someone is to share something about yourself with them.  This sharing involves creating a level of vulnerability and building a bond of trust based on that shared experience.  Without this trust, you will not work as well together and this will negatively impact the quality of work the team is able to produce.

The easiest way to get to know someone is pretty obvious since we do it almost every day: hang out.  To kick off our trust building effort I hosted a dinner party at my house where we ate lasagna and played Wii Sports for a few hours.  If I recall correctly, I think we even buzzed one of fellow our teammates hair!  Letting everyone see where I lived and getting everyone together in a relaxed, non-work setting made it easier for folks to open up and tell stories about where they came from, what they valued, and how they thought about the world.

Hanging out was really good for us, but we had a lot of work to get done and not a lot of time to do it.  To accelerate trust building we played some simple icebreaker games.  One example was the M&M game.  In the M&M game, each team member gets a small pile of M&Ms and everyone sits together around a table.  Going around the table, one at a time, each person picks up an M&M and tells the group something about themselves and then eats the candy.  The color of the M&M determines what the subject will be, red for family, yellow for job, green for hobbies/personal interests, blue for childhood, orange for undergraduate, and brown for future.  In the ideal situation, each person chooses a wide range of colors and talks for less than two minutes at a time for each story they tell.  This game was simple and effective for us.


So did it work?  Another interesting thing my team did was to continue using Lencioni’s survey as a means for assessing how we were doing.  To keep things honest, there was a 60 second time limit on filling out the survey and the results were collected anonymously.  We charted our progress over time in each of the five areas.  Keep in mind that the things at the top of the pyramid probably aren’t valid unless the things underneath are solid.  In this case, solid is a score of 6 or higher on the survey.

My team’s results over the course of the project are charted in the graph below.  The score for each dimension is shown over time.  Lencioni’s terminology is strange to use in this way, so it might be easier to negate the ideas in your head when reading the graph – for example a high score for “Absence of Trust” really means “We have Trust” while a low score means there is no trust among the team. 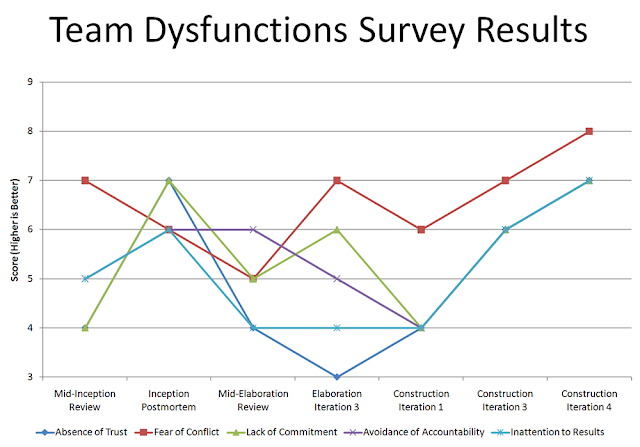 A few interesting points from the graph above:

Lots of teams try to measure morale or unity.  Unlike most methods, Lencioni’s survey is based on sound research and gives concrete feedback on what you need to do to actually improve how your team works together.  If you aren’t naturally having a blast coming in to work with your team, chances are there is something dysfunctional going on.  I highly recommend taking a look at Overcoming the Five Dysfunctions of a Team book.
Book Review Leadership