- March 15, 2010
This post is a recap of a talk I gave this weekend at the Carnegie Mellon University Master of Software Engineering 20th Anniversary Mini-Conference. I’ve made the paper this talk is based on (pdf) available. I've also linked to as many of the primary sources I used in research as I could so please, check out those papers if this is something that interests you.

About a year ago I discussed the idea of using affordances to help figure out how to make software processes work more smoothly for a team. Back then the idea spawned from a moment of crisis and self-reflection on my studio team, but having thought about it for a while and noticing the phenomena occurring on other teams I decided to revisit this idea and see if there is a way to proactively use affordances to avert problems rather than merely explaining problems as they occur. As it turns out there is a precedent for affordance-driven design in object engineering. With a few basic assumptions I think affordance-driven design can be extended to software processes as well. 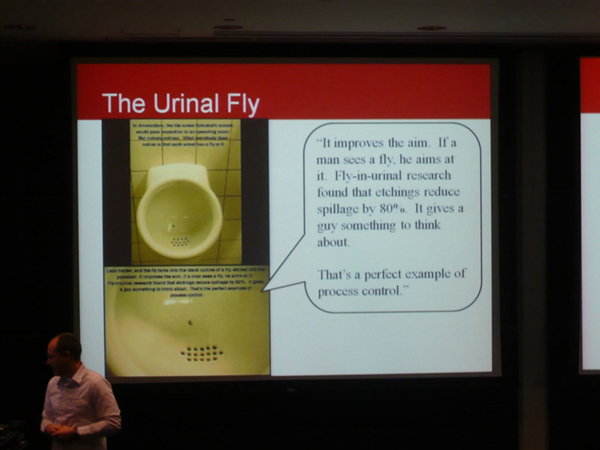 To better explain how to proactively use affordance to pick or tailor a software process it helps to know a little about the Theory of Affordances (pdf). If you’ve read The Design of Everyday Things by Donald Norman then you probably already have a pretty good understanding of how to use affordances in the context of object design and usability. From an ecological psychology perspective, affordances are a way of helping explain or predict how an animal will behave in the context of their environment. In the context of humans, our environment is influenced by our experience, culture, and background as well as our current goals within that environment.

A simple example is the play button on a DVD player. A triangle to the right means play. This is obvious to us because we know what a DVD player does (we have experience with similar devices), we turn to the device when we want to watch movies (we’re looking for the play button), and culturally, our notion of time is left to right (so a triangle pointing right means play while a triangle facing left means reverse). But what if you come from a culture where time is generally represented as passing from down to up vice left to right? In this case, a triangle facing up might be a better symbol on a play button than a triangle pointing right. The value of the affordance changed based on a cultural bias and the user's background.

This is all well and good, but what does it have to do with software process? For the Theory of Affordances to apply to software processes (or any process) we have to assume that process is a part of the environment. This is an interesting proposition since process really only exists in our minds. Process is something that we make up, and like our understanding of an object your knowledge and experience with a process will influence your perception of that process as an environmental influence. As long as you believe in, understand, and follow a process, the steps of that process exist as much as any other object in the real world. Logically this seems to make sense. Even the US patent office will grant patents for a process just as it will a physical invention.

As an example, consider the task of blending a drink using a blender (pdf). Typical functions a user might want to perform are preparing the blender, blending, and cleaning up afterward. Functional affordances might include the "countertop-ability" (the ease with which a blender can be moved to a countertop), the "clean-ability" (the ease with which a user can clean a blender), and "transportability" (the ease with which a user can move a blender around). A person might choose any number of blenders to perform the desired functions but each blender will fulfill the functional affordances in different ways. A hand blender is extremely portable while a gas-powered "whacker" (powered by a 26cc engine, complete with motorcycle throttle - it makes the smoothest margarita you'll eve have) isn’t really intended for indoor use.

Thinking about software processes, the functions will all be related to software: writing, designing, testing, and releasing are just a few possibilities. Some process quality attributes might include:

As an example, say changeability is a desired quality on your team. A specific changeability scenario might go something like this. In order to meet business needs in an aggressive market, the team needs to be able to shift focus and answer competitors’ challenges within five business days. What are the things that might get in the way of this kind of rapid change? Heavy documentation could be one thing, as it nudges teams into keeping a single course. Long iterations also make it difficult to shift focus since more effort is required to make longer term plans. Going light and having short iterations, on the other hand promotes a team’s ability to change. But like every design decision there are trade-offs. Going light in terms of documentation might make it harder to achieve certain kinds of quality, for example.

The main idea here is that it’s relatively easy to identify process affordances by thinking like a designer and applying the skills we’ve already acquired as software engineers. I propose that evaluating process affordances as I’ve discussed here is a great way to pick a process and also to tailor processes. When tailoring simply identify affordances that are helping the team (be sure to keep those), and identify the affordances that are nudging the team in the wrong direction (replace those with affordances that help you do the right things). And above all, remember that if things are going wrong, it isn’t always your fault. The process is a part of the environment and if your process is giving you the wrong cues for your project or team, then it’s the wrong process for you. So change it!
Process Talks

- October 15, 2014
Architectural drivers are formally defined as the set of requirements that have significant influence over your architecture.  In other words, there are some requirements that will help you decide which structures to pick for your system design and others that are less consequential in the context of software architecture.  This implies that it is extremely important to get the architectural drivers right early in a project, as architecture structures will become more difficult to change as the developed software becomes more realized. Thinking about early requirements as "drivers" can also help you to create traceability from stakeholder concerns to specific architectural decisions made.  Having this traceability is great because it helps to promote important qualities in your team, such as agility.  With traceability you can make changes on purpose and with confidence as you understand the genesis for structural decisions. What are Architectural Drivers? Architectural
Read more